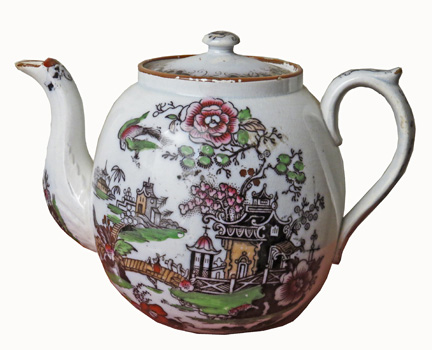 In 1650, the British East India Company gambled on importing two new commodities found in China.  The first was tea, the second, porcelain wine ewers.  Because the ewers were breakable, they were packed for the long voyage inside the bales of tea.  The British, unaware that the Chinese steeped tea in individual cups, concluded that the bulbous ewers must be for tea preparation, despite the pesky problem of the leaves pouring out the spout.  Soon the first teapots, special porcelain ewers with an integral strainer at the base of the spout, were being ordered for export.

The high cost of tea, coupled with the costly imported ewers necessary for preparation, made for a luxury the masses could not afford.  European teapots exploded when filled with boiling water.  But in 1708, porcelain clay was discovered near Meissen and in 1800, Josiah Spode added calcined bone to clay, to produce a hybrid, less expensive porcelain.  In short order, Britain came to dominate the industry producing fine bone china and, of course, teapots.  Prices dropped and mass consumption of tea soon followed – as did rituals.

Tea, sweetened with sugar, came to be the drink of choice for labourers – each given a 20-minute break in a 6-hour shift.  The combined stimulants were a boon for factory owners and brought about the birth of elevenses.

More elevated was the introduction of High Tea by the Duchess of Bedford.  Her elaborate ceremonies are the reason for specialty tea tables like the one below.  Society could crowd about the table – just big enough to hold a “genteel tea table sett”, and at the same time, show off exotic silk dresses normally hidden beneath dining tables.  When tea concluded, the table was easily tilted to vertical and moved to the periphery of the room – ready to take its place of prominence the next day at 4 o’clock.