It’s time for jamming… with our Copper Jam Pan

It’s time for jamming… with our Copper Jam Pan 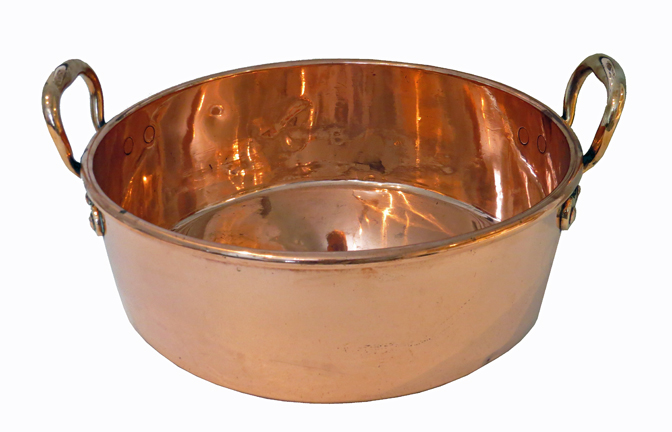 Nothing says summer more than the fragrance and taste of just-picked fresh fruit. The first strawberry of the season, the sweetness of raspberries, lush, liquid cherries… Delicious now, more cherished still in the dead of winter–when the taste of jam takes you back to these precious/fleeting days of Summer. Now, while we’re in the thick of it, you need to be making preserves. And we have what will make it a success, solid copper jam pans.
First, the basics. You won’t find a better heat conductor anywhere. That means you’ll spend less time boiling away the fruit’s flavor, color and texture. Then there is the shallowness and slightly flared sides. The first makes stirring easier and provides a little more space in which the syrupy mass can boil up without boiling over. The second helps moisture evaporate; it doesn’t run back into the mixture as with vertical sides–thus letting you create a more intense jam flavor. And, of course, the wide pan lets the incredible fruit fragrances fill your kitchen–the unmistakable perfume of summer.

Now for the fun stuff.

Make your own lucious strawberry balsamic jam. For rave reviews, contact us for a simple recipe.