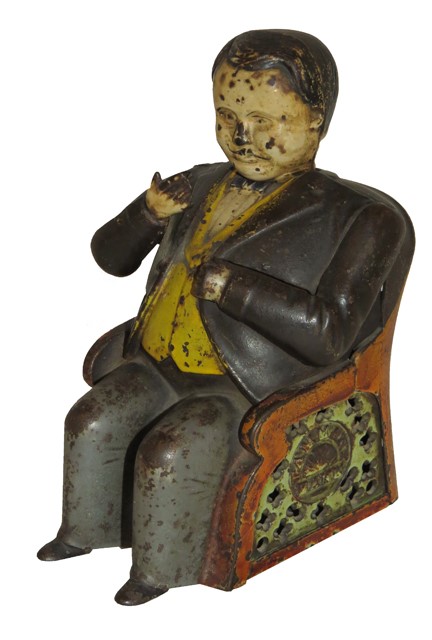 Believe it or not, we have the Civil War to thank for the invention of mechanical banks. Here’s why: during the conflict both the North and South created their own paper money. The public, however, was leery of these new currencies, which lacked intrinsic value. On the other hand a coin, no matter its value, would always be useful as metal – therefore worth keeping.
Shortly after the conclusion of the war, the first mechanical bank appeared. Half bank, half toy, it was designed to encourage youngsters to save by giving them a little free “show” with each penny inserted.  Children were mesmerized and hooked.  So were adults. Between 1870 and 1885, more than 260 different models were made.
Eventually, the subject matter included not only children’s fairy tales, like Humpty Dumpty, but current affairs. Thus the creation of this little fat man of Tammany Hall. Created in 1873, the mechanics here mock the kickbacks taken by America’s most corrupt politician of the times, William “Boss” Tweed, who brought New York City to the brink of bankruptcy in the late 1860s. The “Boss” casually “saves” his pennies, but in his own pocket – rather than a bank.
This era was one of amazing inventions and ingenuity. Toys, formerly created out of wood and cloth were now fabricated out of cast-iron and mass produced. At the same time, tinkerers were experimenting with mechanical technology, including spring-driven and wind up devices – the Industrial Revolution in miniature.
These days, the early banks, whether mechanical or not, are being collected for their historical value – even if they no longer hold their original savings. And, we haven’t stopped holding on to pennies. Since 1943, about 800 million of them have disappeared from circulation.
Cast Iron Tammany Hall Bank
Date/Circa:  1880
Origin:  U.S.
Size:  6″ High
Marie Rasner2020-10-20T19:46:01+00:00August 7, 2017|