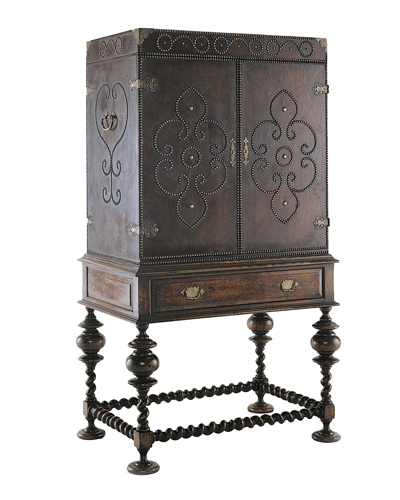 Let’s consider the history of the unique turnings that adorn our popular studded leather cupboard-on-stand, shown above.

Today they’re called “barley twists”. Why? The answer lies in a recipe created in 1638 by French Benedictine monks. It involves boiling down cane sugar with barley water, then twisting the amber strands into candy. The result looks remarkably like these spiral twists.

Used on tables, stands, even bedposts, the barley twist was a familiar feature in England during the late 17th and early 18th centuries, then revived again by Queen Victoria in the mid-to-late 1800s.

While many cabinetmakers can create fine pieces with skilled lathe work, it takes the addition of an exceptional carver’s skill to create these elaborate turnings. This is not easy work – nor quick.

In the 4th century, the design had a different name – the ‘Solomonic Column’. It was then that Constantine the Great delivered to Rome a set of columns, pillaged from ancient Jerusalem – purportedly from the second Temple of Solomon.

Big, carved from marble and shaped like really thick corkscrews, they remain in the Vatican to this day. Earlier still, it is conjectured that this spiral design originated as a representation of the oak tree that was used in the building of the first Ark of the Covenant.

Makes you want to see Raiders of the Lost Ark again, doesn’t it?