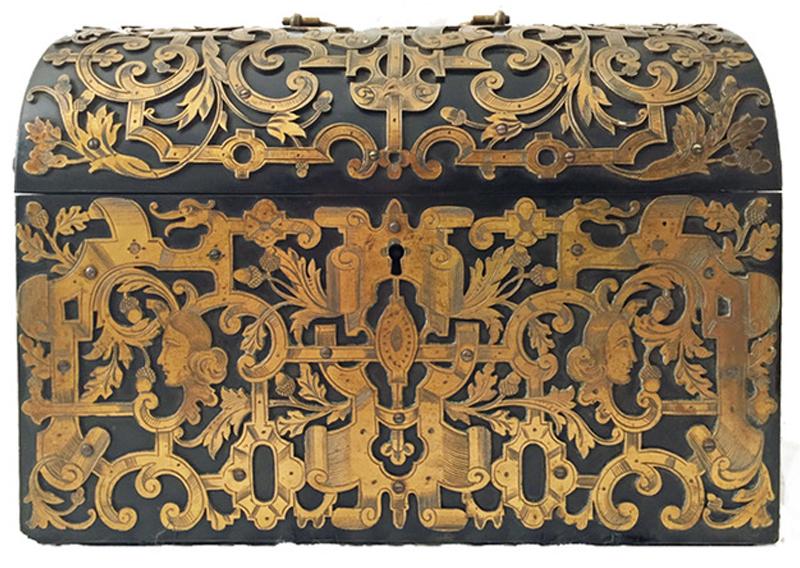 Date/Circa:  1850
Origin:  England
Size:  7″ High x 9″ Wide X 5″ Deep
Catalogue Number:  A0815
Price $1175
Mid-19th century England was abuzz with industry. The age of industrialization was providing more and more to the general population. Manufacturing was new and different, cost effective, and welcomed – by all but a few.   Among the detractors was Augustus Welby Pugin. I n direct opposition to the rapid rise of manufacturing, he and his followers firmly believed in preserving and reviving the traditional methods of craftsmanship and skills begun centuries earlier.
Industrialization affected all the arts and crafts. Take brass for instance. Machines now were able to punch out designs creating the exact same shape over and over again. To some this was perfection, to Pugin and his believers, machines took away the human, artistic element.
We believe the box shown here is a result of this revivalist’s preference, created by a tedious (and centuries old) process called “saw piercing” – sawing minute geometric or other ornamental apertures in thin places of metal so as to produce a reticulated appearance. Using this method, the workman sketched his design on the metal, drilled holes wherever necessary, passed his delicate saw through the holes, and detached the surplus metal as his drawing or his taste dictated. The result was the substitution of “beautiful variety” for monotonous repetition.
This artisan revival was in full swing at precisely the same moment as The Great Exhibition of 1851 – a spectacular display of industry and discoveries in science. Held in the specially built Crystal Palace in Hyde Park, the event brought more than 6 million people to London to revel in the belief that the British Empire was, indeed, the center of the world. Prized among the items on display were works from Howell James & Co. – makers of this exquisite domed box, and jewelers to the Queen and the Prince & Princess of Wales.
Marie Rasner2020-10-20T18:58:53+00:00March 27, 2017|