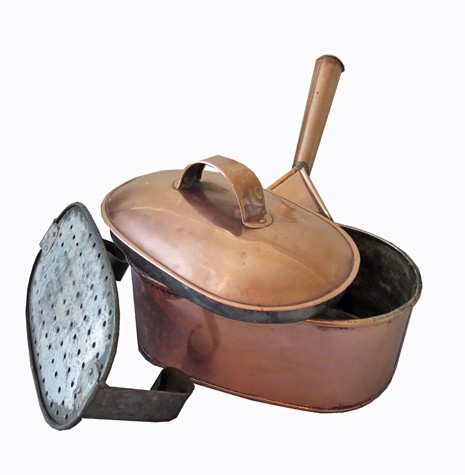 It is speculated that Peking Man roasted meats – though not proven. What is known is that during the Paleolithic Period, that’s 33,000 years ago, people living in southern France (where else?) began to steam their food over hot embers by wrapping it in wet leaves.

It wasn’t until the 16th century, when Catherine de Medici arrived in France from Florence, that steaming entered the modern cooking lexicon. For her marriage to Henry II she brought a humdinger of a dowry, introducing milk-fed veal, baby peas, artichokes, broccoli and pasta. Also for the first time, the French court tasted such delicacies as zabaglione, scaloppini and quenelles (delicately steamed or poached fish dumplings). After her arrival, French cooking began its transformation.

Two events further elevated ordinary cookery to haute cuisine. First, simplicity. Throughout the Middle Ages, foods had been over-spiced to camouflage rancidity. But in 1654, the publication Les Delices de la Campagne, emphasized the natural flavor of food – a revolutionary concept. Second, chef and perfectionist Antonin Careme arrived on the scene in the late 18th century. Creator of la grande cuisine, Careme introduced the concepts of sanitation (!!) and freshness (!). Incredibly, he also demanded his food arrive at table without char, moist and quality consistent.

Responding to the desire for gastronomical greatness, coppersmiths worked overtime to create custom cookware. Dining became an art form benefiting from the proper use of roasters, jelly pans, dry and wet measures, an unending variety of aspic molds, chocolate pots, stew pots, poachers and the 3 pieces pictured here: the side-handled oval steamer (above) created for small roasts, the Poissonier – for properly moist and delicate fish, and the lobster/shellfish steamer.

To discover intact sets – pot, lid and basket, is a rarity.  To be able to create fine gourmet recipes in a style originating almost 200-years-ago is a rare privilege.  And, of course, to dine on fine French cuisine using vintage cookware, the best of both worlds.