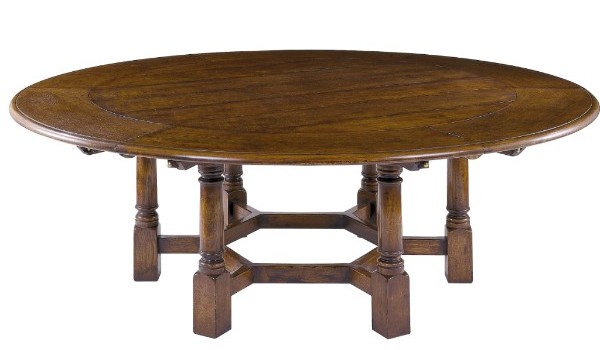 Here’s a sentence you never thought you’d read: We have the Black Plague to thank for extension tables.

Before that time, tables were little more than a plank set upon a trestle base, temporarily pinned in place. Unused tables were dismantled by servants and set aside for the next meal.

But the Plague decimated the world’s population, including servants. Large assemblies of folks eating together were a thing of the past. Add to that the religious persecutions under Henry VIII, and it became unwise to speak freely at mass gatherings. So tables became smaller and “fixed” with permanent tops and bases. Coincidentally, the concept of a dining room, where this new piece of furniture could reside permanently, was also a consequence of the Black Death.

In the late 1700s, the need for a table versatile enough to accommodate both small and larger dining parties arose and a Georgian pedestal table was adapted to accept the insertion of an independent leaf placed between two ends. Over time, tables were needed that accommodated more and more leafs (Or leaves. Either is correct.), until finally, in the late 19th century, the mechanics of extension tables were perfected. The result? Near infinite possibilities.
Elijah Slocum has made its name creating bespoke furniture, including custom built tables boasting expansive growth through the addition of lots and lots of leaves. Whether oval, square or circular, we can create a perfect table for your office or home.

Why “leaf”, by the way? 5000 years ago early Europeans used the word “leup” to mean “to peel or break off.” By the Middle Ages, the word had morphed into “leaf” and described the page of a book or “a hinged part attached to an edge.” By the 16th century, that leaf also could be the hinged portion of a table and within a hundred years, it no longer needed to be attached but could be any movable element or addition to a table. Voila!