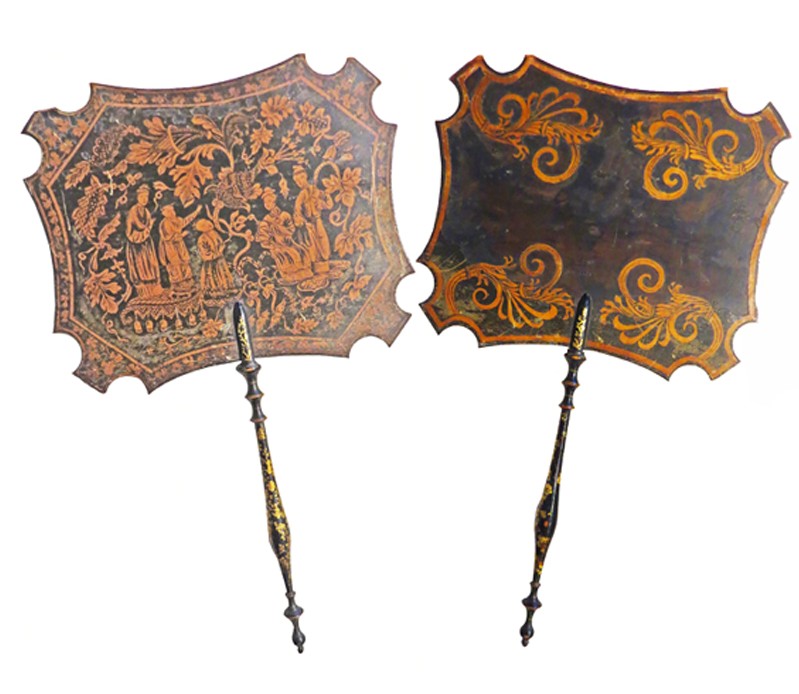 The treasures we’ve assembled here were once a customary part of any well-to-do household. Now days, they are atypical – adding individuality and character to your home. Plus, they have great back stories!

Take the fans, for instance. During the 19th century, to separate oneself from field laborers, the trend among the upper class was to have the whitest skin possible. So makeup was created using a mixture of beeswax and white lead paint. The resulting application worked perfectly just as long as one sat away from the fireplace. Too close and the beeswax and white-face melted away. Hence the invention of these fans – actually called shields, perfect for protecting that dewy complexion (on both men and women) from the heat of the fire. Unfortunately, much of the lead paint contained arsenic – for which no shield was enough.

Protection of another kind is exemplified by the adjustable silver-plated trivet. Originally designed to keep hot kettles and serving bowls from marring the glossy finish of fine furnishings, this clever sure-footed invention allowed 19th century home owners to indulge in another craze – bringing plants indoors. With clay pots and jardinières safe from scratching surfaces, they could satisfy their botanical urges and protect their pale skin from the sun.

Which brings us to the beautiful individual salts. This mineral was rare – hence the expression “worth his salt”. Traditionally, a salt cellar, master salt or salt pig (Yes. Salt PIG.) sat next to the head of the table. Its large size was meant to emphasize the wealth of the estate master. However, due to exposure to moisture, the salt often acquired a thin crust. So, at fancy dinners, individual portions of salt would be located next to each place setting in these miniature silver-plated dishes with nary a crust in sight. In rare instances, like the set shown here, the tradition of dipping into the salt with fingers was replaced by using dainty individual salt spoons. Salts are still used today, but not so grand as these.

Pigs of a different kind were the source of piggy banks. For years people have believed that the pig shape is the reason for the term “piggy banks”. However, in the Middle Ages, an orange–colored clay called pygg was used in making jars for storing staples such as salt. Sometime in the 18th century, these jars morphed into hollow containers with a coin slot, often shaped like a pig (but in our case, a chicken) to make a visual pun on the name of the clay. Who knew?